Facts about bread and baking

How we bake tasty, fresh bread

People have been baking bread since ancient times and there are many different ways to bake. Here’s some inspiration from the magic world of bread. How the flour you choose creates different kinds of bread, why fresh bread smells so wonderful and how to best store bread to avoid throwing it in the bin. 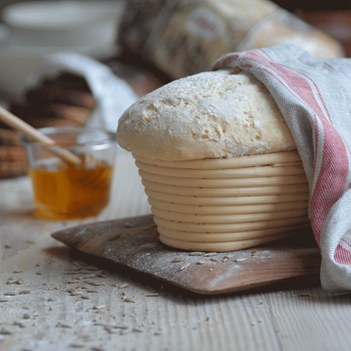 What makes bread juicy and fluffy?

Lots of things contribute to the texture and taste of bread. The ingredients you use, which rising method you choose, how the dough is processed and the temperature during rising and baking.

Yeast – a living culture
Yeast is often used to give bread its volume. Bubbles in the dough during the fermentation process are from carbon dioxide formed when the yeast breaks down the starch and sugars in the flour. Some alcohol forms during fermentation, but this disappears when bread is baked in the oven. We use our own yeast, which we make from unsold bread that we take back from stores to prevent food waste.

Cold fermentation
Sometimes you want the flavours from the ingredients to develop a little slower to get bread with a more rustic taste. Just let the dough cool in the fridge overnight. The gluten threads strengthen too, which will make the dough more porous so you need less yeast. It’s handy to have some ready-made dough to quickly bake breakfast rolls or bread in the morning.

Quick dough
Using “raskdeg” (quick dough) is an old bakery tradition. The Swedish word ‘raskning’ means fermentation. ‘Raskdeg’ or quick dough is the pre-dough left to rise and then mixed with other ingredients and flour. It gives the bread a fuller taste and has some of the same positive effects as sourdough.

Strong flour gives volume
The stronger flour with high protein content, the fluffier bread you can bake. You get strong gluten threads through long kneading, which become barriers in the dough, retaining air bubbles that are formed during the fermentation.
You can feel the difference between a dough that you just started kneading and a dough kneaded for 10-15 minutes. The gluten threads have become flexible, creating a nice texture in the dough. Weak flour with a low gluten content is good for baking crispbread, biscuits and Swedish toasts, and pastries that should not rise high. 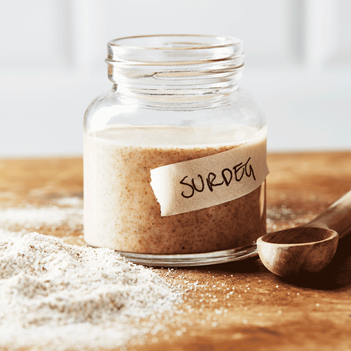 Baking with sourdough is a tradition believed to originate in Egypt over 6,000 years ago. It has lots of advantages: bread becomes juicier and lasts longer. It becomes less crumbly, gets a better texture and richer aroma with a more acidic taste. And it’s less sensitive to mould.

With sourdough, mix wheat and/or rye flour with water to a loose dough, then leave it standing to rise for about 2-5 days. The natural yeast in flour multiplies. The time required is determined by temperature.

In a sourdough, lactic acid, acetic acid and aromatic substances form thanks to the natural microorganisms called acid bacteria.

Use a part of the sourdough base and let the rest continue to grow. Feed it with more flour and water once or twice a week to keep the sourdough going.

This type of sourdough is called living sourdough and is the type we use in a lot of our bread. The definition of sourdough bread is different between different cultures and traditions vary. Sourdough bread differs in taste, character and the way you bake it. Finland, Germany and France all bake it differently.

Some people talk about very old sourdoughs, but it is only the bacterial culture in the sourdough. The sourdough itself is usually renewed every 18 to 20 hours.

The bacterial culture in our sourdough is classic German rye sourdough, a Berliner. 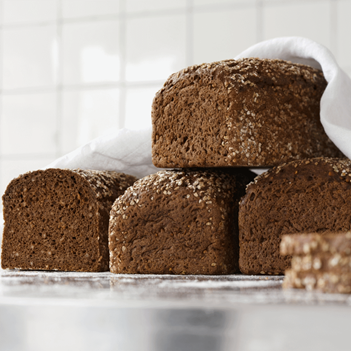 Why fresh bread tastes the best

The secret to the wonderful taste and aroma of freshly baked bread is the Maillard reaction. It’s a chemical reaction between proteins, certain carbohydrates and some of the fatty acids that occur when bread is baked in the oven, which gives it a delicious flavour and fine colour.

Many of these flavours are volatile and quickly disappear, but the right packaging slows the process. When you toast bread, you create a new Maillard effect, which means the aroma and flavours are released again. 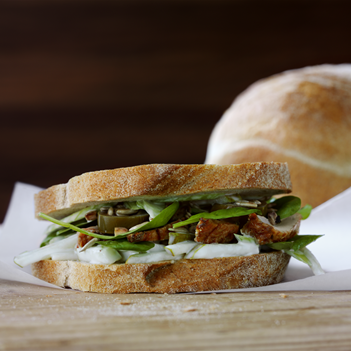 How to keep your bread fresh

Most of us love fresh bread and we are proud that our bread stays fresh for a long time – something we constantly work with. All soft bread ages and people believe that bread gets dry because it dries out. The truth is more complex than that.

Don’t put your bread in the fridge
The main reason for bread getting stale is that a carbohydrate called amylopectin shifts structure and becomes more crystalline. This means that water doesn’t stay in the bread in the same way. This ageing process speeds up at lower temperatures, which is why you shouldn’t put bread in the fridge. It can be a good idea to store bread in the fridge on hot summer days, as it can start to mould if the air is moist and hot.

Long life
Our bread stays fresh for a long time because we bake in extra filtered air under strict hygiene rules using extremely clean equipment. No one touches our bread after it comes out of the oven, it is packed directly. That’s why we don’t have to use preservatives in our bread.

There are other factors that prevent bread from getting stale. Low pH (acid) protects it, which is one of the reasons why sourdough bread lasts longer. Sugar and honey help to maintain moisture, as they bind water into the dough. Bread baked on rye flour often lasts a long time, as it has a high water content and different carbohydrate structure.

Soft types of bread and sweeter loaves without crust are best kept in well-sealed plastic bags. Bread with a crust can be stored with the cut surface against a cutting board and a paper bag over.

Freeze
A good way to extend shelf life is to freeze bread. All our bread is delivered fresh to stores in Sweden, Denmark, Finland and Germany, without being frozen. That’s why you can put it in your freezer at home if you don’t want to eat everything at once. Make sure you put the bread in a well-sealed, good quality plastic bag, like the bag our bread is packaged in. 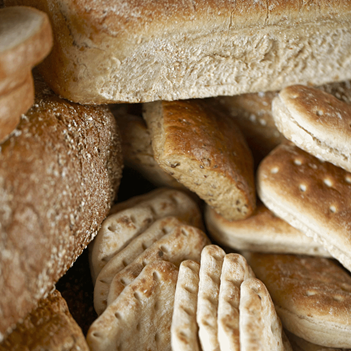 When is bread old?

The EU has labelling legislation which means that certain foods must be labelled with the best-before date. The purpose is to show how long something is expected to keep its quality, it's not about how long it is safe to eat something. Bread is a product that you can usually eat even after it passed its best-before date.

How long bread lasts depends on what ingredients are used, how the bread is stored and the season. If bread is mouldy you shouldn’t eat it, but often people throw away bread unnecessarily.

It is important to trust your senses. Smell, look and taste the product, then decide whether you should eat it or not.

Sometimes people throw away edible bread just because it feels stale. There are lots of things you could do with bread instead of wasting it:

You’ll find several tips on how to use old bread in cooking here. 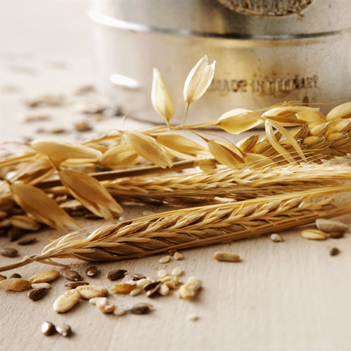 Bread will have a taste and texture depending on which flour you use. Wheat flour generally gives lighter and more airy bread, while rye and coarse flour with wholegrain produce more moderate and compact bread.

Many people believe that whole-grain bread is always dark, but all grain has a light colour and you can make white bread using whole-grain flour. The dark colour usually comes from malt, wort or dark syrup. Spices and other ingredients such as pumpkin seeds, sunflower seeds, fennel and cardamom, give bread added flavour and character.

Wheat
Wheat flour is available in many varieties and is the flour most used in Sweden. It has a high protein and gluten content, providing fluffier bread.

There are several thousand different kinds of wheat and they are divided into spring and autumn wheat depending on when they are sown. Some of the most common wheat varieties are:

Dinkel is an ancient type of wheat, also called spelt. Many people think dinkel tastes stronger than regular wheat. Some believe it is gentler for people with IBS (irritable bowl syndrome). There’s no scientific evidence for this, but dinkel has better nutritional values than common wheat flour.

Durum is also a type of wheat, often slightly yellow in colour. It contains a high content of gluten proteins and is suitable for pasta as well as bread.

Rye
Rye is the grain that grows best in northern Europe, which is why we often bake with rye flour here. Rye is often used in slightly coarser bread and crispbread. Rye flour is a bit sharper and breaks gluten threads easier. It doesn’t give the same airy bread as wheat flour, so people often mix the two.

Whole-grains
The choice of flour affects the nutrient content of finished bread. For example, whole grain flour provides bread that is richer in fibre. Whole-grain flour uses all of grain: the core, shell and sprout, which retains more minerals and vitamins. You can buy finely ground flour, but you only find whole-grains in cereal products such as rye and wheat. Whole grain bread can be light or dark, rough or smooth.

More about bread, health and nutrition

Other types of flour
There are many grain products of different grinding sizes and mixtures available. Here are the most common:

Sifted flour: the outer parts of the grain are sifted away, so this flour is not whole-grain.

Graham flour: a whole grain wheat product not milled to flour but to fine grains.

Semolina: is made from the protein-rich core, which is free from whole grains. It is milled to fine grains not flour.

Bran: the shells of either wheat or oat. Buy it separately and add to your dough if you want more whole grains.

Sprouts: the inner parts of the grain without their shells. Mix these in dough or sprinkle them on top of the bread to add flavour or texture.

Our skilled millers make all the varieties of flour we use for our different breads at our own mill, Lilla Harrie Valskvarn.

Sustainable products Bread from Pågen is a climate smart alternative....
Quality ingredients We bake with Swedish ingredients as much as possible,...
Sustainability overview We care about our shared resources and the environment...