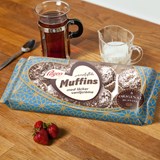 We know, it’s impossible to open a bag of Gifflar and just eat one.

It's like there’s something magical in this bag pulls your hand to it, over and over again. It's not magic, it's just irresistibly tasty croissants with a lovely, swirling stuffing.

Just small enough and tasty enough that you want to take one more.

Gifflar Apple and taste of cinnamon are baked in Sweden using Swedish flour from Pågen's own mill.